There’s a lot of buzz around electric vehicle (EV) stocks right now. Tesla‘s (NASDAQ:TSLA) third-quarter results blew expectations out of the water, catapulting Tesla to a new all-time. With a market cap above $1 trillion, it’s now worth more than Facebook, and is the fifth-most-valuable stock traded on a U.S. exchange. Similarly, encouraging Ford Lightning reservations have pole-vaulted Ford to a fresh 52-week high.

Then there’s up-and-coming EV company Lucid Group (NASDAQ:LCID), which delivered its first cars last weekend after beginning production in late September. With a market cap of over $55 billion, Lucid may look ridiculously overvalued for a company that’s barely begun making cars. But if it has a shot at becoming the next Tesla, then its share price looks very cheap. Let’s look at where Lucid stands today and where it’s headed to see if it really can become the next Tesla.

Why Tesla is a $1 trillion company

Tesla’s success stems from its ability to sustain a high revenue growth rate while also firmly establishing itself as a profitable automaker. Tesla’s transition from the Model X and Model S to mostly making Model 3s and Model Ys allowed it to capture market share from a wider range of the car market. 96% of the 237,823 cars that Tesla produced in Q3 were Model 3s and Model Ys.

With scale, Tesla has been able to achieve a high profit margin even as it sells lower-priced cars. For example, Tesla made $7.61 billion in Q3 2020 automotive revenue and $2.11 billion in automotive gross profit, giving it a gross margin of 27.7%. In Q3 2021, Tesla grew its automotive revenue by 58% to $12.06 billion, but made $3.67 billion in automotive gross profit for a gross margin of 30.5%. Tesla is demonstrating a rare ability to sustain and even grow its profit margin while raking in way more revenue. To support all the new Tesla vehicles on the road, the company grew its supercharger stations by 49% compared to Q3 2020 and 10% over just a quarter ago in Q2 2021. 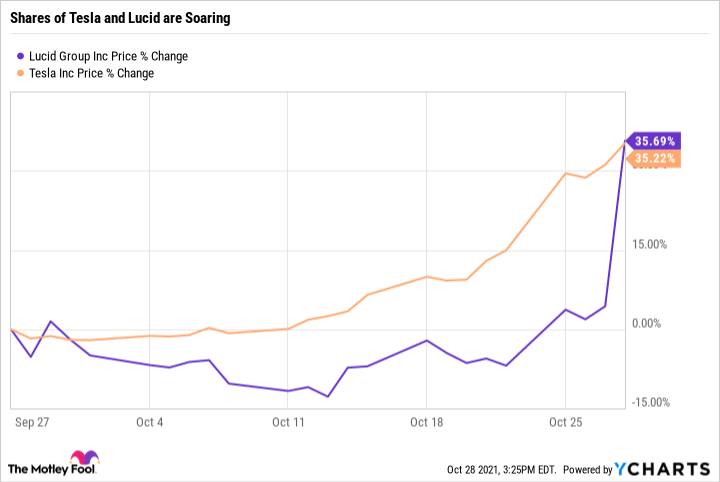 Despite spending 81% more money on capital expenditures in Q3 2021 than Q3 2020, Tesla was still able to generate $1.33 billion in free cash flow (FCF), just 5% less than Q3 2020. In short, Tesla is the heavyweight automaker, and any company that challenges it has big shoes to fill.

Why Lucid is emerging as a great company

Lucid is following in Tesla’s footsteps by releasing its high-margin vehicles in low production first before expanding to higher production volumes and less expensive vehicles. It’s also copying Tesla’s playbook by limiting its advertising spending, focusing instead on building a network of showrooms and service centers and letting its customers and social media build its brand at a low cost.

Unlike Tesla, Lucid isn’t investing in its own fast-charging network, believing it can save a lot of money by leaning on the influx of third-party charger stations. However, that’s about the only thing Lucid isn’t doing itself. Management has made it clear that it is very protective of its intellectual property, which is one of the main reasons Lucid decided to do all of its manufacturing in-house at its production plant in Arizona.

Lucid’s competitive edge is its technology. The company surpassed Tesla in the EV range wars by notching an Environmental Protection Agency-rated range of 520 miles on its Lucid Air Dream Edition Range vehicle, which is the highest rating ever given to an EV.

Aside from its impressive horsepower, range, and fast charging time, Lucid deserves a lot of credit for meeting expectations time and time again. In its early days, Tesla was notorious for overpromising and underdelivering. Its languishing share price reflected investor frustration with a company that tried to micromanage its manufacturing process and expand new ideas before getting a grip on its Model 3 production. In this case, investor sentiment was correct. Once Tesla solved its Model 3 woes, the rest was history.

It’s early into its tenure as a publicly traded company, and Lucid is already exhibiting consistency. That could all change in 2022 if Lucid fails to deliver its expected 20,000 Lucid Air sedans. But so far, the company has done an excellent job of delivering on its promises.

Is Lucid a buy?

Lucid hopes to produce as many cars in 2022 as Tesla produced in about eight days in Q3. For Lucid to become the next Tesla, it needs to make a lot more cars (many of which need to be at lower price points), achieve profitability, and become an energy company, not just a car company. As Lucid grows, it also needs to differentiate itself from other automakers that will be nipping at its heels for a slice of the EV market. It’s a tall order, and one that remains entirely unproven. As it stands now, it seems doubtful that Lucid will become the next Tesla. However, Lucid stock could still be worth buying for growth investors willing to pay a premium for a company that has so far shown an ability to hit deadlines and develop impressive technology.