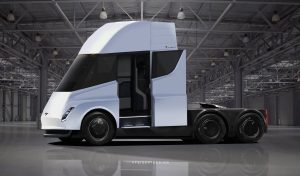 In a recent interview, Auke Hoekstra, a researcher at Eindhoven University of Technology and an electric vehicle expert, explained how battery-electric trucks like the Tesla Semi could end up dominating heavy-duty freight routes in regions like Europe. According to the EV expert, weight and range limitations that are usually associated with electric vehicles may very well be quite irrelevant when it comes to the real-world use of the electric long-haulers.

While addressing questions from Clean Energy Wire, Hoekstra explained that skeptics of vehicles like the Tesla Semi often take the hardest business case that a diesel truck is able to manage. An example of this is a multi-day trip with a team of two drivers who cover thousands of kilometers in one trip. The EV expert explained that while traditional diesels still hold an advantage against their battery-electric competition in this scenario, this edge disappears when one looks at the greater trucking market.

“My research in the Netherlands has revealed that 80% of trucks – even the really big rigs, the semis – travel 750 kilometers per day at the very most, and many cover far shorter distances. That’s because if you want to cover more kilometers, things become very expensive very quickly, because you have to pay overtime, etcetera. So, in general, you can’t make a driver do more than 750 kilometers per day. Therefore, this is the range you have to hit with about 80 percent of trucks.

“Additionally, almost all trucks return to base at the end of the day – which creates ideal conditions for charging. We still have this romantic idea that truckers are on the road for weeks on end, away from home. But this scenario has become relatively rare. Most truckers simply move stuff from Rotterdam port to Venlo, halfway to Germany’s Ruhr area, to take an example from home… Many truckers do this sort of trip a couple of times per day, and then return home. So, you can charge the vehicle overnight at a default location. This means you don’t have a chicken and egg problem – you can arrange for the infrastructure and for the truck at the same time,” the EV expert remarked.

Interestingly enough, Elon Musk has recently remarked that Tesla is looking to release the Semi with a range that falls well within Hoekstra’s numbers. While speaking at the European Battery Conference, Musk stated that he believes it is feasible to achieve 800 kilometers of range for the Semi quite easily, and he also sees a path, over time at least, for the Class 8 truck to achieve an even more impressive 1,000 kilometers per charge. Such numbers can go a long way towards shifting the market’s perception of all-electric long-haulers and their limitations. Hoekstra, for his part, noted that such a scenario has already happened before with the original Tesla Roadster.

“I do remember that in the car market, things really changed when the Roadster hit the market. That really changed the conversation. It changed the whole perception of electric vehicles. The conventional wisdom back then was that you can only use them on short distances in the city. And suddenly this car appeared, and everything was possible.

“Within the next couple of years, we’ll see the first Tesla semi-trucks on the road. This will have a similarly huge impact on the conversation about electric trucks. You can just point to it and say: “Look, it’s moving there, and it is doing 800 kilometers.” Suddenly, all those people who say ‘it cannot be done’ within truck companies will hear their boss replying: ‘Well, our competitor can do it – so you will have to do it, too.’” Hoekstra said.

What’s quite remarkable is that this is not even the most exciting part of the Semi’s butterfly effect on the trucking sector. If the Tesla Semi finds solid footing in the trucking market in the same way the Model 3 found a good niche among premium midsize sedan buyers, a “Tesla Effect” of sorts could happen on the trucking market. This could come in the form of other battery-electric trucks being developed for the long-haul market. This should, in turn, result in a massive innovation push from several truck makers, similar to what is happening now with companies like Tesla, Lucid, Rivian, and veterans like Ford and GM in the consumer EV segment.