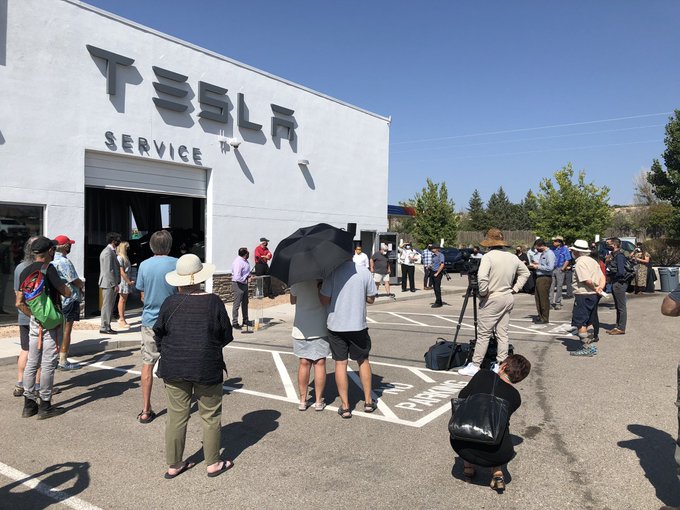 For the longest time, Tesla owners in New Mexico had to drive out-of-state to centers in Colorado or Arizona just to get their vehicles serviced. New Mexico law prohibits car manufacturers from selling directly to consumers in the state, forcing Tesla owners to seek services in nearby states. However, the new Tesla facility lies within the boundaries of a tribal nation, which means the service center is not subject to state law.

In an event on Thursday, Nambé Pueblo leaders joined US Senators Martin Heinrich and Ben Ray Luján to emphasize the value of electric vehicles as part of a widespread effort to address and battle climate change. While speaking to the attendees of Thursday’s event, Nambé Pueblo Gov. Phillip Perez highlighted the importance of the new EV facility. “This truly represents a historic moment,” Perez said.

New Mexico has long been elusive for Tesla. New Mexico is also home to the active auto dealership lobby group, even though the state law prohibits automakers from selling directly to consumers. Tesla has proposed establishing storefronts and service centers in the past, but these efforts have so far repeatedly failed in the legislature. Discussions about Tesla’s increasing presence in the state have also been the cause of much debate.

Tesla’s service center in New Mexico is a 7,000-square-foot facility that lies in what was previously a casino located near the Nambé Falls Travel Center. Tesla would also be supporting tutors and scholarships for Nambé Pueblo students in the area. Sen. Luján stated that he is extremely excited about the expansion of the EV movement in New Mexico. Having grown up in the area, he also remarked that he is personally looking forward to the Tesla Cybertruck, the company’s all-electric steel pickup.