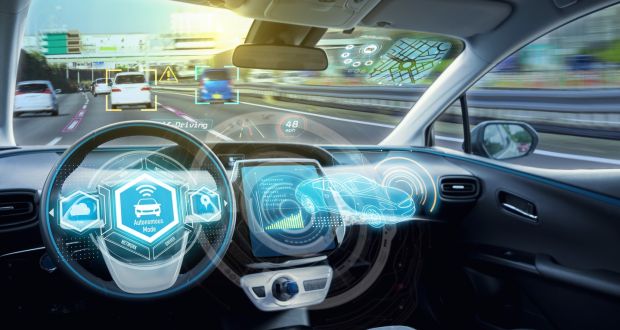 If you’re wondering what it takes to develop a self-driving car, know that Tesla is using a 1.8-exaFLOP AI supercomputer packed with 5,760 GPUs that train neural networks it hopes one day will power autonomous vehicles.

The machine was described by the automaker’s senior director of AI, Andrej Karpathy, during an online academic computer vision conference this week. It is used to develop Tesla’s super-cruise-control system Autopilot, and also what could be a fully self-driving system when finished. Tesla has been chasing the autonomous vehicle dream for years; the tech has so far proved elusive.

“This is a really incredible supercomputer,” Karpathy said. “I actually believe that in terms of FLOPS, this is roughly the number five supercomputer in the world.”

It should be noted the prowess of a supercomputers are typically measured in FP64 precision. It’s not clear what precision Tesla’s 1.8 exaFLOPs of compute is running at.

It has 780 compute nodes, each containing up to eight Nvidia A100 80GB GPUs. The super also has 10PB of NVMe storage. Tesla’s AI models churn through millions of ten-second clips of driving footage recorded at 36 frames per second during training. “Computer vision is the bread and butter of what we do and enables Autopilot. For that to work, you need to train a massive neural network and experiment a lot,” Karpathy added. “That’s why we’ve invested a lot into the compute.”

DeepMind has teamed up with a non-profit research org to use its AI protein-folding model AlphaFold to develop drugs that tackle parasitic diseases.

Specifically, the Drugs for Neglected Diseases Initiative will use DeepMind’s machine-learning software to figure out if new drugs can treat Chagas disease and Leishmaniasis. These are spread in tropical Latin America climates, and develop after people are bitten by triatomine bugs and sandflies. They can fatal if left untreated.

“AI can be a game-changer: by predicting protein structures for previously unsolvable protein structures, AlphaFold opens new research horizons,” said Ben Perry, DNDi discovery lead, according to the Beeb. “It is heartening to see powerful cutting-edge drug discovery technologies enabling work on some of the world’s most neglected diseases.”

Google launched a machine-learning software tool on its cloud platform that customers in the manufacturing industry can use to automatically spot damaged products or packages during manufacture.

The Visual Inspection AI is designed to process images of items passing through assembly lines, and identify defective or problematic gear. Customers will have to fine-tune the model on the goods they sell and the kind of defects they want to identify. By using the tool, clients can better discard broken items or fix issues on products before they’re shipped, or at least that’s the hope.

“The benefit of a dedicated solution [like Visual Inspection AI] is that it basically gives you ease of deployment and the peace of mind of being able to run it on the shop floor,” Google Cloud’s Dominik Wee, managing director of manufacturing and industrial, told VentureBeat.

“It doesn’t have to run the cloud,” he added. “At the same time, it gives you the power of Google’s AI and analytics. What we’re basically trying to do is get the capability of AI at scale into the hands of manufacturers.”