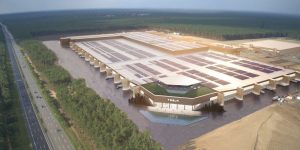 Tesla seems determined to walk the walk in its Germany-based EV production facility, with recently-shared filings for Gigafactory Berlin revealing plans for the setup of over 600 electric car charging stations in the site. Based on the filings, it appears that the charging spots, which include eight Tesla Superchargers, will be allotted for Giga Berlin’s employees.

Gigafactory Berlin is expected to employ up to 12,000 workers for its first expansion phase, though reports have emerged suggesting that as many as 40,000 employees may be hired for the facility when it is fully ramped. With this in mind, it is pertinent for Gigafactory Berlin to offer charging stations for its employees, a good number of whom would likely be driving electric cars.

#GigaBerlin
A bit of statistics. ?
The yellow area will be the future parking lot of GIGABERLIN.
with 3254 total parking spaces.
with 615 charging station. ⚡
with 8 superchargers. ⚡

The details of the over 600 EV chargers that would be set up in the Gigafactory Berlin complex have not been disclosed by the electric car maker, though speculations suggest that most of the spaces would be comprised of Level 2 chargers. Level 2 chargers are among the most common public chargers in Europe, being ubiquitous in locations like malls, offices, and shopping centers.

The progress of Gigafactory Berlin’s construction has been quite stunning, with several buildings in the complex now approaching completion. So far, Tesla’s construction partners are already working on the facade of the Drive Unit building, and the Paint Shop of the Phase 1 zone is now being fitted with equipment. Work on the casting area is also progressing quickly, as per observations by members of the EV community.

#GigaBerlin
October 27 / 2020
I took a day off today to visit the GIGABERLIN. Great progress everywhere, facade work on the "paint shop" and on the north side of the "Drive unit " continues.
Also the "Casting" is growing.
The speed is overwhelming. pic.twitter.com/tWsdN0WHEl

Save for Gigafactory Texas, which will produce the Cybertruck, Gigafactory Berlin is poised to become the company’s most advanced EV production site when it begins operations next year. CEO Elon Musk, for his part, has noted that the Model Y that will be produced in Giga Berlin’s Phase 1 area will be different compared to its counterparts from the United States. Musk has noted that all-electric crossovers made in the German factory will be equipped with the company’s new 4680 cells.

The Tesla CEO has further mentioned that Gigafactory Berlin will feature its own battery production facility, though reports have emerged suggesting that the German facility could be initially supported by the company’s pilot battery production line in Fremont, California. Musk has also noted that Giga Berlin will feature a revolutionary paint shop, which should offer unique color options like Deep Crimson, which the CEO considers as one of his favorites.