What’s it like to be the child of the fourth richest man on the planet? Bill Gates’s son, Rory John Gates, is one of only three people who can tell you. There’s just one problem: he is notoriously private (and for good reason). Although facts about Rory are scarce, we managed to find some interesting tidbits about him and his siblings. Read on for everything we know about Bill and Melinda’s only boy. Those who assume he and his sisters are spoiled brats will be in for a surprise.

Who Is Rory John Gates?

Rory John Gates was born on May 23, 1999, in Seattle, Washington. He is the second child and only son of Microsoft co-founder Bill Gates and philanthropist Melinda Gates.

His sisters are Jennifer Katharine Gates, 24, and Phoebe Adele Gates, 18. 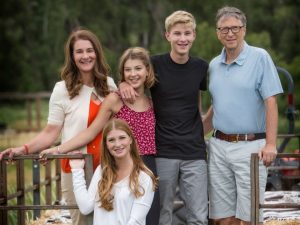 Little is known about Rory’s early life, but we know he spent a chunk of his childhood at Xanadu 2.0—Gates’ $127 million family compound in Medina, Washington. Highlights of their home base include 24 bathrooms, a 23-car garage, and a beach that has sand imported from the Caribbean. Property taxes alone are over $1 million a year.

Growing up, Rory attended Seattle’s Lakeside School. It’s his father’s alma mater and his sisters are also graduates of the private co-ed school. Currently, it’s believed that Rory attends the University of Chicago. In 2018, the Chicago Tribune reported that Bill Gates was most likely the new owner of a mansion in Chicago’s Hyde Park neighborhood. The property, purchased through a trust, is located three doors down from the University of Chicago campus. The following year, Redditorswith loose lips confirmed that Rory was a student at the school. A photo of him with the university’s Moot Court teamsuggests he is earning a law degree.

Rory Gates Believes In Gender Equality For All

One thing we know about Rory is that he is a champion for women’s rights. On his 18th birthday, Melinda Gates penned an essay for Time about his perspectives on feminism.

“Rory is compassionate and curious,” wrote his mother. “He’s intelligent and well-read and deeply informed about the wide range of issues that interest him. He’s a great son and a great brother. He’s inherited his parents’ obsessive love of puzzles. But one of the things that makes me proudest is that Rory is a feminist.”

Melinda told readers that the family often talked about gender equality at the dinner table. She encouraged her children to speak out when they witnessed unfair treatment.

“Rory, for his part, does,” she continued. “Across 18 years of conversations, sharp observations and everyday actions, he’s demonstrated his belief that gender equality is something worth standing up for.”

She recalled a mother-and-son trip to Malawi in 2015. On their travels, the family learned that local men had recently begun to share more duties with their wives. Rory surprised his mother by telling her he was unmoved.

“I was impressed,” Melinda wrote. “I thought that, in many ways, what these men were doing was extraordinary. Rory respectfully disagreed. He told me he thinks that standing up to unfair norms is nothing more than exactly what men everywhere should be doing. Yes, he recognizes that the more entrenched the norms, the more courage it takes to confront them. But he also believes that it’s a universal responsibility and one that he’s already striving to uphold in his own life.”

It’s easy to imagine that Rory and his siblings grew up with all of the latest technology at their fingertips. After all, their dad founded Microsoft. But that’s not the case. Bill and Melinda have been cautious about the risks of too much screentime. Bill originally introduced a screentime cap for his kids in 2007, after his daughters appeared to be hooked on a video game.

“We don’t have cellphones at the table when we are having a meal,” Gates told the Mirror in 2017. “We didn’t give our kids cellphones until they were 14 and they complained other kids got them earlier.”

In a 2018 article for The Times, writer Alice Thomson confirmed the Gates family screentime rule. About Melinda, the writer said, “Her children don’t have smartphones and only use a computer in the kitchen. Her husband Bill, the Microsoft co-founder, spends hours in his office reading books while everyone else is refreshing their homepage.”

Rory Won’t Be Seeing Billions In Inheritance Any Time Soon

Some would argue that Bill Gates has more money than any single human deserves, but he still did a relatively good job at parenting. In addition to the family’s strict rules on smartphones, the kids were required to do unpaid chores. They’ve also inherited their parents’ passion for philanthropy. In a 2014 interview with Rolling Stone, Gates said, “We’ve raised our kids in a religious way; they’ve gone to the Catholic church that Melinda goes to and I participate in.” Bill went on to explain how his mission in life is to reduce inequity in the world. It’s a “religious belief” that they have passed along to Rory and his siblings.

After his passing, Bill plans on giving the bulk of his wealth to the Bill And Melinda Gates Foundation. The children will reportedly each receive a $10 million inheritance. Of course, that’s more than most of us will ever have, but it’s a drop in the bucket of their dad’s net worth.

According to Bill, the intention is for his kids to have a solid education, and from there, they can go out and have their own careers. Explaining the inheritance plan, Bill said, “It’s not a favor to kids to have them have huge sums of wealth. It distorts anything they might do, creating their own path.”

While there’s no official word on what Rory is up to these days, it’s a safe bet that he’ll use his privilege to do good in the world. As his mother wrote in Time, “I feel lucky that Rory was born at a moment in history when young men are being encouraged to be so thoughtful about society and their role in it — and also to adopt new, more expansive definitions of what it means to be a man.”