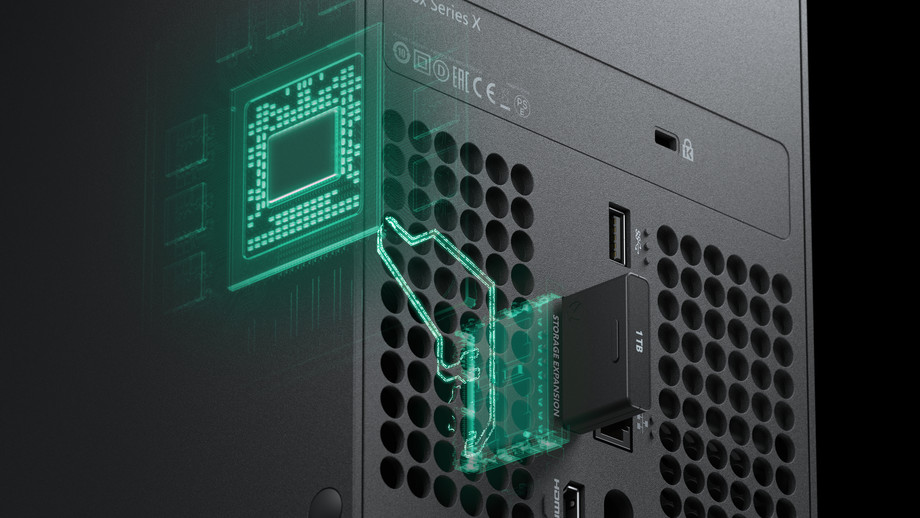 Microsoft is revealing the full specs for its Xbox Series X console today, and it includes support for removable storage and much faster load times for games. The software giant will be using a custom AMD Zen 2 CPU with eight cores clocked at 3.8GHz each, a custom AMD RDNA 2 GPU with 12 teraflops and 52 compute units clocked at 1.825GHz each. This is all based on a 7nm process and includes 16GB of GDDR6 RAM with a 1TB custom NVME SSD storage drive.

Microsoft is using two mainboards on this Xbox Series X compact design, and the entire unit is cooled through air being pulled in from the bottom and pushed out at the top via a 130mm fan.

Developers will be using the overall 16GB of memory in two ways: there’s 10GB for fast GPU optimal memory, 3.5GB for standard memory, and 2.5GB reserved by the OS. All of this power will include the ability to expand storage through 1TB expansion cards at the rear of the console, with USB 3.2 external HDD support and a 4K Blu-ray drive. Microsoft is targeting overall performance at 4K 60fps, up to 120fps.

One of the most obvious improvements that Microsoft is demonstrating with the Xbox Series X today is load times. In one tech demo (above), State of Decay 2 loads a full 40 seconds quicker on the Series X compared to the Xbox One X. That’s a massive improvement over current consoles.

Microsoft is using a solid-state drive on the Xbox Series X, and the focus is on speed and load times for next-gen games. The Xbox maker is using something called “Xbox Velocity Architecture,” that is designed to improve the integration between hardware and software for streaming of in game assets. The result will be seen in large open world games, where developers can use this system to create high fidelity environments that load dynamically using the processing power and SSD of the Xbox Series X.

This new SSD support will also allow Xbox Series X owners to resume multiple games instantly and even resume titles after the Series X is rebooted for a system update. Game states will be saved directly to the system’s SSD, so you can resume days or even weeks later. Microsoft is demonstrating this quick resume feature, using what looks like the existing dashboard for the Xbox One.

The next-gen Xbox will also support 8K gaming and frame rates of up to 120fps in games. Microsoft has partnered with the HDMI forum and TV manufacturers to enable Auto Low Latency Mode (ALLM) and Variable Refresh Rate (VRR) on the Series X as part of its HDMI 2.1 support. “The team has also been working with the industry’s leading TV manufacturers for the past two years to ensure the display ecosystem is ready for the features coming with Xbox Series X,” explains Microsoft’s Will Tuttle.

All of this should reduce latency from when you press a button on an Xbox controller to when you see that movement show up on screen. Speaking of the controller, it’s now USB-C, uses AA batteries, and supports Bluetooth Low Energy. There’s also a new share button for sending clips and screenshots to friends, and existing controllers will work just fine on the new Xbox Series X.

Microsoft has also confirmed the physical dimensions of the Xbox Series X. If used vertically, it measures 301mm tall and 151 mm in depth and width. Today’s spec unveiling comes ahead of Microsoft’s plans to fully detail the console to developers later this week. Microsoft is also planning to unveil more details about the games we’ll see for the Xbox Series X in June.