The latest in its string of shady practices.

Grubhub has a new “growth hacking” strategy that includes creating a restaurant listing on its platform for places it doesn’t even partner with. According to a new report by the San Francisco Chronicle and tweets by restaurant owner Pim Techamuanvivit, Grubhub has been allowing customers to order food from its websites from restaurants that haven’t technically signed up to be on Grubhub or its subsidiaries’ platforms. (Disclosure: my parents own a restaurant that partners with Grubhub.)

Techamuanvivit explains in a Twitter thread that over the weekend, she received a call from a customer claiming their order hadn’t been delivered. The only problem: Techamuanvivit’s restaurant, Kin Khao, doesn’t offer takeout or delivery.

I managed the floor @kinkhao tonight, at 8.30pm I answered the phone, someone called to ask about their delivery order that was placed 45 minutes ago. Perplexed, I told him we didn’t do delivery, not even take-out. He said what were you doing on @seamless then?

I told him we’ve never been on it, not in our entirely lifetime as @kinkhao. He sounded really confused, so we said goodbye and I hung up the phone. Then I got a little curious, so I went into the office and googled “kin khao delivery”, and guess what came up.. 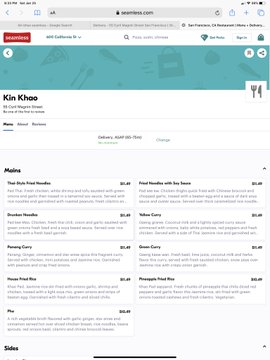 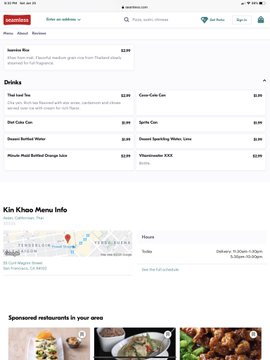 55 people are talking about this

Grubhub owns multiple food directory services — including Seamless, Eat24, MenuPages, and AllMenus — and it’s not alone in this practice. Competing services Postmates and DoorDash also host restaurant listings and their menus on their platform even if those businesses don’t offer delivery or have never agreed to partner with those services; a practice that both companies have implemented for several years.

Hours after Techamuanvivit’s tweets, Grubhub removed listings for her restaurant and said it only added her restaurant since it was deemed to be in high demand.

“Starting a couple months ago in select cities across the country, we’ll add restaurants to our marketplace when we see local diner demand so the restaurant can receive more orders and revenue from deliveries completed by our drivers,” Grubhub told The Verge in a statement. “It’s our aim to bring the best delivery experience possible while balancing the interests of our diners, restaurants and drivers, and complying with all local laws and regulations in connection with our business.”

Grubhub said it plans to list non-partnered restaurants in select markets with the goal of doubling the number of restaurants on its platform by the end of 2020. The company also said that if a restaurant does not want to appear on its platform in any shape or form, it would need to directly ask Grubhub to be removed.

Postmates’ stance is similar. “If they don’t want to do takeout, they should message that across their internet presence [as well as in-store], then the customers aren’t going to search for it,” Dass said.

The problem is that this practice ends up hurting small businesses with minimal or no internet presence to start, particularly those run by people who are less familiar with web marketing and SEO practices. Without constantly checking around for new sites or listings, it’s impossible to know whether someone’s created a duplicate site to mislead customers into thinking they are ordering directly from a restaurant.

It’s also extra time out of a small business owner’s day spent tracking erroneous orders from third-party services. Last summer, Grubhub came under fire for creating fake websites using domains that sound similar to real businesses in an effort to drive up commissions. Though Grubhub says it welcomes businesses to request the removal of unwanted micro-sites or menu listings, the process is typically so lengthy and drawn out that many restaurant owners simply don’t have time to complete the request.

Marco Chirico, owner of Brooklyn restaurants Enoteca on Court and Marco Polo Ristorante, says he spends hours every week disputing charges from Grubhub for phone calls that don’t result in orders, since he has to request call transcripts, identify which calls were mistakenly charged, then formally request the refunds. Grubhub takes a cut of anywhere from 3 to 20 percent commission, and it charges higher for orders that come through its apps or micro-sites. (This includes partners like Yelp, which lists redirected phone numbers for restaurants in order to boost commission cuts for Grubhub.)

Ordering food online can often be convenient, but increased competition from delivery services is ultimately hurting many local business owners. If you want to make sure your money benefits your community the most, here’s a guide to ensuring every dollar makes it to your favorite restaurants.