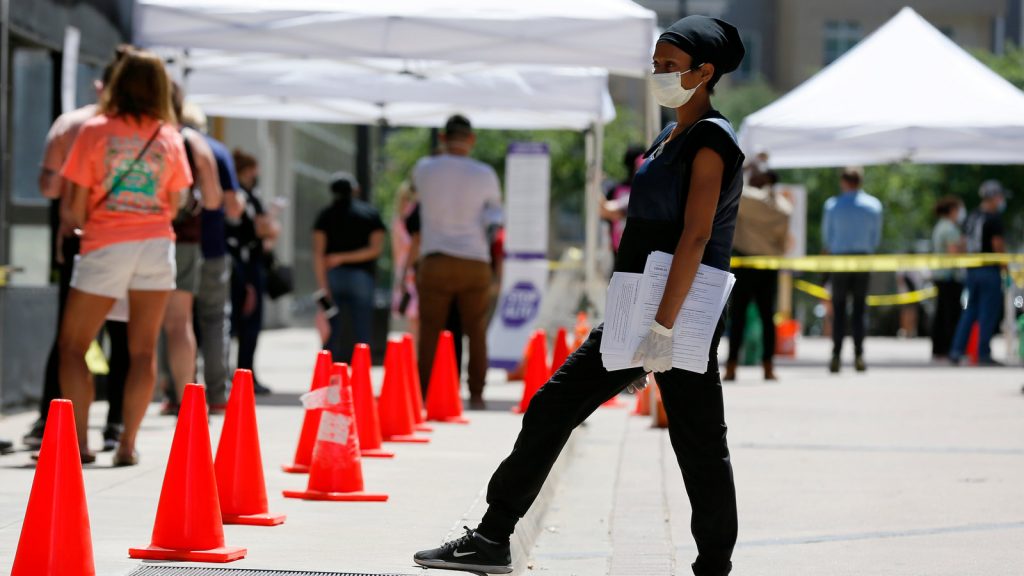 Arizona, Florida, California, South Carolina and Texas all reported record-high single-day increases in coronavirus cases on Thursday as states continue to ramp up testing and the virus reaches new communities.

The record-setting numbers come amid an ongoing tide of new infections and increasing hospitalizations reported among a slew of states across the American South and West. Some states now seeing a rise in infections were among the first and most aggressive to reopen.

New cases have risen rapidly in Arizona and some hospitals are nearing capacity. The state reported a record-number of patients in ICU beds on Thursday, accounting for 84% of the state’s capacity.

On Wednesday, Arizona Gov. Doug Ducey addressed the recent surge and announced new policies that allow local officials to require that residents wear masks in public and in businesses after a slew of health specialists wrote a public letter asking the Republican governor to do so.

In making the announcement, the governor also acknowledged that the virus is spreading more quickly than is acceptable. He had previously said that officials expected cases to rise after the state eased restrictions and reopened businesses on May 15.

“I said two weeks ago that there is not a trend here,” Ducey said Wednesday evening while presenting a chart of daily new cases across the state. “Looking at the last two weeks of data, there is a trend. And the trend is headed in the wrong direction and the actions we’re going to take are intended to change that direction and reverse this trend.”

Ducey asked Arizonans to practice social distancing and recommended they wear a mask. He also announced plans to continue to ramp up testing as well as contact tracing, a process whereby health officials contact infected people and try to identify the source of infection as well as other people who might have been infected.

Ducey also said the state is monitoring Santa Cruz and Yuma counties, which are along the state’s southern border with Mexico, because they are “areas of significant spread,” he said. Most new cases are coming from Maricopa County, which is the state’s most populous and urban county, Ducey said. But he said Santa Cruz and Yuma counties have the highest percent of people testing positive, with 31% and 20% of all tests coming back positive in both counties, respectively.

Florida’s new cases reported Thursday bring the state’s total to 85,926, according to data from the Florida Department of Health. The data also shows that at least 3,061 people have died of Covid-19 in Florida as of Thursday.

Florida was among the first states to reopen, with Republican Gov. Ron DeSantis allowing most restaurants and stores to open with limited capacity on May 4. The heavily populated Miami-Dade and Broward counties did not reopen until May 18. On June 5, most of the state moved deeper into reopening, allowing more stores to reopen as well as for gyms and some stores to operate at full capacity.

Earlier this week, after the state reported the previous record single-day increase in infections, DeSantis said the state would not reimplement more restrictions.

“We’re not shutting down. We’re going to go forward … We’re not rolling back,” the governor said at a news briefing Tuesday. “You have to have society function.”

DeSantis noted Tuesday that the average age of those who test positive has fallen from 65.5 years old in March to 37 in June. He said that’s evidence that the state is successfully protecting its most vulnerable from infection since the virus is more likely to cause severe disease in the elderly.

On Tuesday, DeSantis attributed the increase in cases at least partly to increased testing. The number of tests being run each day has increased across the country and in Florida. However, the percent of people tested who turn up positive has also increased in Florida, doubling since early June.

DeSantis on Tuesday also attributed some of the increase in cases to clusters that he said have been traced back to farm workers. He cited a cluster at a farm in the state’s northern Alachua County where he said an infected migrant worker who had come from Miami spread the virus. He said that dense living conditions among farm workers could be spreading the virus.

“Some of these guys go to work in a school bus, and they are all just packed there like sardines, going across Palm Beach County or some of these other places, and there’s all these opportunities to have transmission,” he said.

He also cited an outbreak at an industrial factory in central Florida, another at an airport as well as one at a jail in Lake County outside of Orlando. He added that the state will continue to try to protect its elderly population, especially in nursing homes and assisted living facilities.

Total confirmed cases in Texas are now nearing 100,000 as Thursday’s record increase brings the total to 99,851. On top of the biggest single-day spike in cases, the state reported an increase in hospitalizations as well. There are now 2,947 people occupying hospital beds across the state, according to data from the Texas Department of Health and Human Services.

In a news briefing on Tuesday, Republican Gov. Greg Abbott assured the public that there is “no reason today to be alarmed.” He emphasized that the number of occupied beds is only a small percentage of total beds available in the state and that hospitals can move to surge capacity at any time.

The governor also attributed the recent spike in cases largely to increased testing of Texas’ prison population. However, he did acknowledge that some of the increase has probably been due to people not practicing social distancing, particularly in “bar-type settings.”

“We think we can also accurately say there has been an increase — especially beginning around the Memorial Day time period and going through a few weeks after that — an increase in people testing positive because they may not be practicing all these safe standards,” Abbott said Tuesday.

Texas was another state among the first to reopen. Abbott allowed the stay-at-home order to end on April 30 and by May 1, all stores, restaurants, movie theaters and malls were allowed to reopen with modifications.

And while the governor has encouraged residents to wear face masks, he signed an executive order that prevents local officials from legally enforcing mask wearing. Mayors from the states largest cities wrote a letter to the governor earlier this week asking for the power “to set rules and regulations on the use of face coverings in each of our cities.”

Thursday marks the first time California has reported more than 4,000 new cases in a single day. The announcement brings the total number of confirmed infections in the state to 161,099. At least 5,290 people in California have died due to Covid-19, according to the state’s data.

Most of California’s new cases came from Los Angeles County, which reported 2,115. The state added that the single-day record was fueled by 600 positive test results that came in “from an earlier testing period.”

California Gov. Gavin Newsom was the first in the nation to announce statewide restrictions on movement and businesses due to the coronavirus. Starting May 12, Newsom allowed restaurants and some stores to reopen in counties that met certain criteria tied to the state of the local outbreak.

However, on May 18, Newsom announced that he was relaxing the criteria counties were required to meet in order to move into the next phase of reopening.

At a news briefing on Monday, Newsom attributed the rise in overall cases to increased testing. He added that the percent of people testing positive has remained stable at around 4.5% for more than a month.

“There is no vaccine for COVID-19. There are only individual behaviors and actions we must all maintain that help stop its spread,” she said in a statement. “This virus does not spread on its own. It’s spread around our state by infected people who carry it wherever they go – their work, the supermarket, the post office, a friend’s house.”

Data from the South Carolina Department of Health and Environmental Control shows that the percentage of people who are testing positive for the coronavirus has increased from 5.7% on June 4 to 14.4% on Wednesday. More than 70% of hospital beds in the state are currently in use, according to the state.

Republican Gov. Henry McMaster was among the last to implement a stay-at-home order and one of the first to end it on May 4. But he began to allow some businesses to reopen with restrictions even earlier, on April 20.

Amid the recent spike, the state is continuing to ramp up testing and working to make it more accessible to the state’s population, the health department said.

“Healthy people may feel they are resistant to the virus, may feel that even if they contract it, they’ll have mild symptoms and feel better in a few days,” Bell said. “This may be true for some – but it’s also true that we are seeing hospitalizations and deaths in those who were previously healthy and in almost every age group.”

Earlier Thursday, former Food and Drug Administration Commissioner Dr. Scott Gottlieb told CNBC that some states now seeing a resurgence in cases are “on the cusp of losing control.”

“These are outbreaks. We’re seeing doubling times now falling under 10 days,” Gottlieb said on CNBC’s “Squawk Box.” “These are on the cusp of getting out of control. I think these states still have a week or two to take actions to try to get these under control.”

He added that he’s concerned about “the lack of political will” for officials to continue to implement proven interventions like social distancing and mask wearing.

“I’m more concerned than I was three weeks ago heading into the fall,” he said. “Unless we get comfortable taking some common sense measures, where we can, some limited measures, we’re going to be stuck with a lot more spread.”