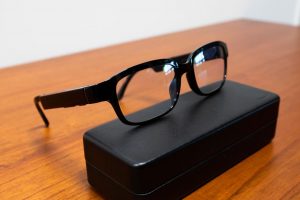 Amazon’s glasses that let you talk to Alexa are now available for anyone to purchase.

The new Echo Frames cost $249.99 and will ship Dec. 10. Amazon launched the Frames at its annual hardware event last year as part of its lineup of “Day 1” products, but they were only available to consumers on an invitation-only basis.

Amazon introduced improvements to the second-generation Echo Frames based on feedback from invite-only users.

Among the updates are up to 40% longer battery life, an auto off feature to maximize battery life when the glasses aren’t in use, a “VIP Filter” that lets users prioritize notifications from select apps and contacts, as well as an “Auto Volume” feature that automatically adjusts the device’s volume based on the noise level of a user’s surrounding environment. Echo Frames also come in three new colors: modern tortoise, horizon blue and classic black.

The lenses are clear but Amazon said customers can get prescription lenses put in at a LensCrafters store.

Users who purchased the first-generation Echo Frames via invitation will be able to purchase the upgraded version for $70, Amazon said. An Amazon spokesperson declined to say how many users bought the Echo Frames as part of the invite-only program.

While the Echo Frames are “graduating” to a full launch, Amazon said it’s sunsetting another “Day 1 Edition” product, the Echo Loop ring. The Echo Loop, also launched last year, was a titanium ring that let users talk to Alexa.

Customers who bought the Echo Loop will continue to receive updates and support for the device, Amazon said.