If a car company tells people they can sign up to add a feature to their vehicle dubbed “full self driving” it’s reasonable to expect future road trips will be handled solely by the car, allowing a human behind the wheel to nap, eat, read or just sit back and enjoy the ride. When it comes to Tesla Full Self Driving, or FSD, that assumption is incorrect—and also means the U.S. state that buys the most Teslas likely won’t bar a new subscription program for the feature.

That’s because Tesla FSD, despite the name, is an advanced driver assistance system, not Waymo-style robotaxi technology that requires approval for use on California roads. When Tesla’s beta software is used, the company cautions that a human behind the wheel remains vigilant at all times because it “may do the wrong thing at the worst time.” But since Tesla lawyers have told California regulators that it’s not really an autonomous system, it doesn’t appear FSD subscriptions break state rules. 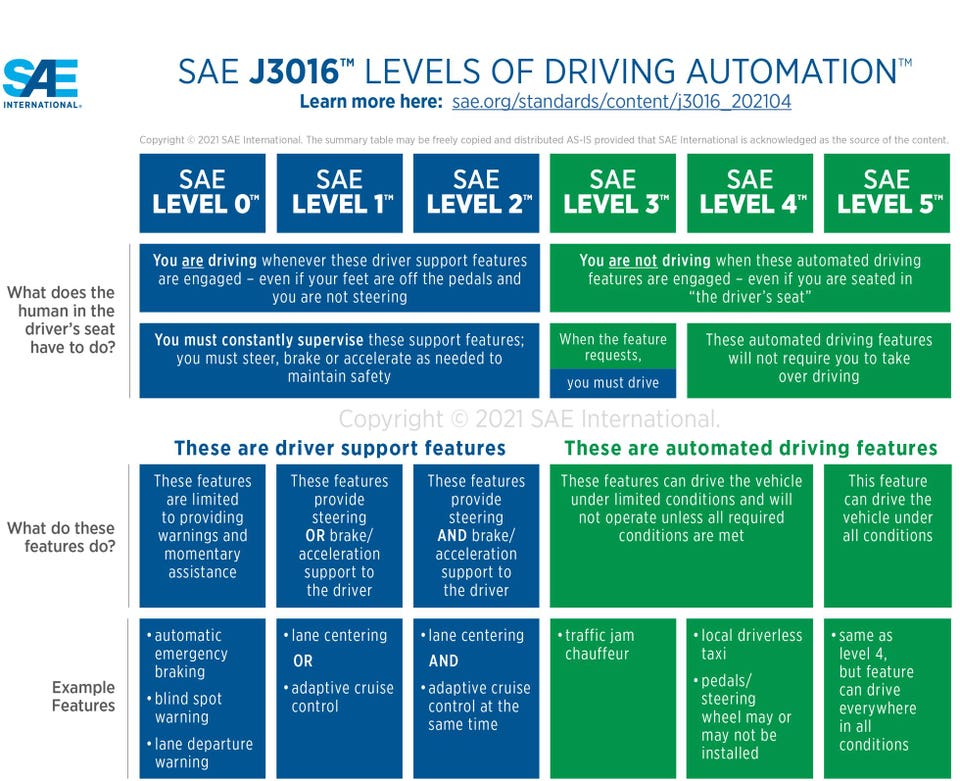 “California’s autonomous vehicle regulations cover vehicles equipped with technology that makes it capable of operation that meets the definition of Levels 3, 4 or 5 of the Society of Automotive Engineers,”  the state’s Department of Motor Vehicles tellsForbes. “The DMV does not regulate Level 2 Advanced Driver Assistance Systems, which need to be actively and continuously monitored by a human driver.”

The company this month said vehicle owners wishing to upgrade their Autopilot systems to FSD can do so for monthly subscription fees ranging from $99 to $199, based on the system they’d previously purchased. Among the enhancements are Navigate on Autopilot, which guides a car from highway on-ramps to off-ramps, driving on city streets and ability to identify stop signs and traffic signals and automatically stop or slow the vehicle accordingly. FSD features are labeled as beta, however, and a recent video posted from one user suggests there are significant reliability issues. Those include the vehicle failing to recognize it’s driving in a bus-only lane in San Francisco, making an unintended lane change and failing to avoid bushes.

Elon Musk began talking about FSD in late 2016, but has yet to achieve the fully autonomous cross-country drive he’d said would happen years ago. Tesla also doesn’t appear close to achieving Musk’s goal of a company-run autonomous ride network in which vehicle owners can make money by making their FSD cars available for the service when they aren’t using them. He’d suggested that might be possible by as early as the end of 2020. It wasn’t.

An additional concern is that the Full Self Driving name can be confusing for consumers as it suggests a level of capability that doesn’t exist, at least at this point. When California’s DMV began a review of Tesla’s plan to roll out FSD last year, Tesla lawyer Eric Williams told the agency in a Nov. 20, 2020, letter that cars operating with FSD’s City Streets mode weren’t autonomous.

“Currently neither Autopilot nor FSD capability is an autonomous system, and currently no comprising feature, whether singularly or collectively, is autonomous or makes our vehicles autonomous. This includes the limited pilot release of City Streets,” Williams wrote.

The Federal Trade Commission, tasked with protecting consumers from deceptive or fraudulent product marketing, declined to say whether it’s reviewing Tesla’s promotion of FSD. The National Highway Traffic Safety Administration, which is responsible for auto safety, has said it’s stepping up monitoring of the auto industry’s use of partially automated features to more rapidly identify defective tech. NHTSA said last month it’sinvestigating 10 fatal crashes in which Autopilot may have been in use.

NHTSA didn’t immediately respond to a request for comment on Tesla’s new promotion of FSD subscriptions.

Meanwhile, California’s DMV says it “continues to gather information and review the claims made by Tesla regarding its use of automated vehicle technology. Regardless of the level of vehicle automation, DMV emphasizes the need for manufacturers to inform customers and drivers about the intended use, capabilities, and limitations of their technology.”