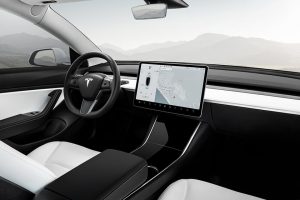 Tesla all-electric vehicles showed tremendous growth in terms of registrations in Germany, skyrocketing over 83% in Q1 2021 compared to the same period in 2020. Tesla continues to show exceptional expansion in Germany, despite its production facility within the country not building any vehicles yet.

In the past year, Tesla has expanded its international footprint greatly through the production of its all-electric vehicles in regions outside the United States. With no vehicles currently being produced in Europe by Tesla, the company is still showing the ability to grow in registrations, thanks to increasing demand and an exportation strategy of its vehicles from Shanghai to Europe. The decision to export vehicles from its Chinese production facility to the European market is paying dividends, as Tesla grew exceptionally in the first quarter of 2021.

New data from Germany’s Federal Motor Transport Authority (FMTA) shows that Tesla registered 3,703 units in March 2020, a strong finish to an explosive first quarter. The March registrations accounted for over 60% of the quarter’s registrations as a whole, where Tesla had 6,074 of its cars filed with the German FMTA. 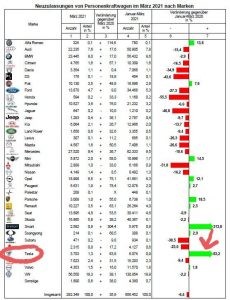 The real indication of growth, however, does not lie in the impressive figures that Tesla has shown in the first quarter of 2021 alone. It lies in the comparison of Q1 2021 to Q1 2020, where Tesla showed an 83.2% increase in registrations Year over Year. The growth is the second-highest on the list, trailing only SMART, which registered a 313.8% increase in vehicle registrations when comparing Q1 2021 to Q1 2020.

Tesla has managed to exhibit tremendous growth and demand increases while not building any vehicles in Germany domestically. The company will soon open the Giga Berlin production facility, a production unit that has been in development since late 2019 when Elon Musk announced the factory’s arrival while accepting an automotive industry award. Tesla has battled through various time delays thanks to the COVID-19 pandemic to remain on time with its project and plans to begin production and deliveries of the Model Y crossover later this year.

Earlier this week, Teslarati reported on growing EV registrations in the United Kingdom, which were displacing the sales of petrol and diesel-powered vehicles. The expansion of electric cars continues to be evident across the world, not only in the United States where Tesla holds its main market. Tesla has been able to provide an expansive footprint in the highly competitive Chinese and UK markets, as well as Europe where EVs charge toward the majority in terms of powertrains. Tesla’s German production facility is sure to only increase these vehicle registrations moving forward, as exports will not be needed to keep up with the ever-growing demand for the company’s cars.