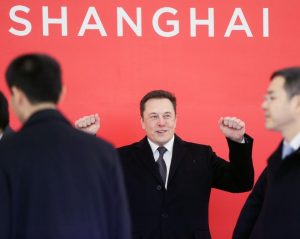 SINGAPORE— Elon Musk, whose Tesla Inc. is on the defensive in China, praised the country’s plans to tackle carbon emissions and grow its economy, saying it will become the auto maker’s largest market in the long term.

In a short interview with Chinese state television published three days after he sought to reassure Chinese politicians about concerns that the company’s vehicles pose a national security risk, Tesla’s chief executive officer said he was impressed by the carbon emission goals set out in the country’s latest five-year economic and social blueprint that was agreed upon earlier this month.

“I’d like to strike an optimistic note and I’m very confident that the future of China is going to be great and that China is headed towards being the biggest economy in the world and a lot of prosperity in the future,” he told state-run broadcaster China Central Television in an interview clip published Tuesday.

China accounted for about a fifth of Tesla’s global revenue of $31.5 billion in 2020, according to public filings. The U.S. is its largest market with $15.2 billion in sales.

On Monday, Mr. Musk was among the handful of foreign executives that participated in a video conference with Chinese Premier Li Keqiang, according to a photo posted on the Chinese government’s website. The executives took part in an annual state-hosted high-level conference during which Mr. Musk addressed concerns over how Tesla handles data from cars in China.

Mr. Musk’s electric vehicle firm is under scrutiny in China, The Wall Street Journal reported last week, as Beijing restricted the use of Tesla vehicles by military staff and employees of key state-owned companies. Chinese authorities are concerned the data gathered by the cars could be a source of national-security leaks, according to people familiar with the effort.

Mr. Musk told Chinese politicians and businessmen over the weekend at China Development Forum, where he spoke via video link, that Tesla would never provide the U.S. government with data collected by its vehicles in China or other countries.

People familiar with the matter have said one of the worries is that cameras in Tesla vehicles can record images constantly and obtain data including when, how and where the vehicles are being used as well as the contact lists of mobile phones synced to them.

The use of data and cutting-edge technologies have become major points of friction and competition between the U.S. and China in recent years. Washington cited national security concerns when it applied punitive actions on Chinese companies like Huawei Technologies Co. and Xiaomi Corp.

Tesla has largely experienced good fortune in China: in 2018, the Palo Alto, Calif.-based company became the first foreign car maker to gain approval to build a wholly-owned factory in China, where it makes its popular Model 3 sedan and Model Y compact crossover vehicle. Under rules that were abolished in April 2018, overseas auto makers had to enter into joint ventures with local partners before making cars in China.

“These are very aggressive goals and I think they are great goals and I wish other countries had these goals,” the Tesla founder said of China’s targets.