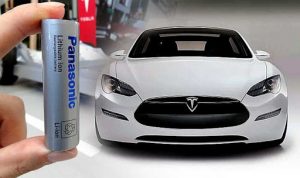 Panasonic said on Tuesday it expects its battery business supplying Tesla to be profitable this fiscal year, and raised its full-year operating profit forecast by more than half.

After several years of production troubles and delays at Tesla, Panasonic is beginning to see its decade-old partnership with the U.S. company become a profit driver.

Panasonic announced in October that it was developing a new battery cell designed by Tesla, one that would help Tesla halve battery costs and ramp up battery production 100-fold by 2030.

From the next business year we want to end the question of whether (the Tesla) business will be profitable or not,” Chief Financial Officer Hirokazu Umeda said on a call.

The Japanese electronics conglomerate is also planning to add a new production line at the Nevada factory it owns with Tesla, and is looking at building a lithium-ion battery business in Norway in a bid to tap European carmakers.

Under outgoing Chief Executive Kazuhiro Tsuga, Panasonic has shifted away from its low-profit home electronics business to focus on housing fixtures, car electronics and batteries for electric vehicles.