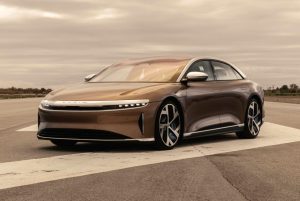 The Lucid Air will be the first-ever vehicle to equip Dolby Atmos for a unique and state-of-the-art 21-speak Surreal Sound system.

Earlier today, Lucid revealed the developments, announcing a new partnership with Dolby, a legendary and top-of-the-line company offering some of the best sound system experiences since 1965. Dolby has primarily focused on audio noise reduction along with sound encoding and compression. These factors allow the company to offer sound products that are among the best in the market.

With Lucid’s introductory electric vehicleexpected to hit the market later in 2021, the automaker is finalizing the finer details of its first production EV. Lucid is the first company ever to have automotive integration with Dolby Atmos. It offers owners “an immersive audio experience in the Lucid Air luxury EV that envelops listeners with the rich, multi-dimensional sound of Dolby Atmos.” The experience goes past putting a new spin on some of the classics that drivers listen to during a commute. The Dolby-integrated vehicle will also offer increased safety through enhanced driver aids that feature directional acoustic signaling of notifications, warnings, and all other driver and passenger alerts, the company said.

The Dolby system will utilize acoustic signaling of notifications, indications, warnings, and all other audio emitted to alert the driver and passengers. The sounds will sound as if they are coming from the location of the passenger who they are directed toward. For example, if the rear driver’s side passenger is riding without a seatbelt, the warning signal will come from the direction of the unbuckled belt. Blindspot detection will also feature directionality indicators to help warn the driver of an incoming threat from a specific side of the car.

“As the first car to integrate Dolby Atmos, Lucid Air delivers an elevated, multi-dimensional sound experience on par with the other innovations at Lucid,” Derek Jenkins, Senior Vice President of Design for Lucid, said. “The post-luxury experience is not just about beautiful design and next-generation technology, it also speaks to an unmatched in-car experience that engages all the senses.”

The Lucid Air’s newly-revealed sound system is optimally integrated and positioned within the vehicle’s interior to allow all occupants of the electric car to feel the relative movement of individual sounds as they move around the cabin. Dolby partnered with the legendary Capitol Records Studio C recording studio as a reference design for the vehicle’s speaker integration placement strategies. Studio C was utilized for the audio production of several feature films, including the Beatles-influenced musical Across the Universe and Leonardo DiCaprio’s award-winning film The Revenant.

When combined with the Surreal Sound system within the Lucid Air, Dolby Atmos offers an unprecedented listening experience that will revolutionize the way music is listened to within a vehicle.

“From reimagined classics to some of today’s biggest chart-topping hits, Dolby Atmos Music has been positively embraced and viewed by the music community as one of the industry’s biggest paradigm shifts within the past 50 years,” Tim Pryde of Dolby said. “As a company, we are fully committed to bringing immersive audio to all the ways in which music is enjoyed. Automotive is a natural extension for the incredible experience of music in Dolby Atmos, and we are excited to bring this to the world with Lucid.”

A video from the Lucid and Dolby partnership is available here.

News source
“If you liked the article, share it in ...”