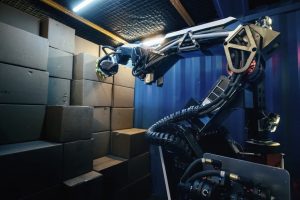 Stretch can shift up to 800 boxes an hour, comparable to a human

Boston Dynamics is best known for its robot dog Spot, a machine designed to work in a range of environments, from offshore oil rigs to deep underground mines. But in recent years, the company has increasingly focused attention on the logistics space, and today is unveiling a new robot with just one application in mind: moving boxes in warehouses.

The robot is called Stretch and looks relatively dull for a Boston Dynamics creation. It’s not modeled after humans or animals, and instead aims to be as practical as possible. It has a square mobile base containing a set of wheels, a “perception mast” with cameras and other sensors, and a huge robotic arm with seven degrees of freedom and a suction pad array on the end that can grab and move boxes up to 23 kilograms (50 lbs) in weight.

What connects Stretch to other Boston Dynamics machines is a focus on mobility. Usually, when automation equipment is installed in warehouses the system is bolted down in one place with a workflow modeled around it. Stretch, by comparison, is designed to slide into any existing workplace where it could be useful loading or unloading goods.

“It all depends what the problem of the day is.”

This will allow Boston Dynamics to target customers who would otherwise avoid automation as too expensive or time-consuming to integrate, says Perry. Around 80 percent of the world’s warehouses don’t have any automation equipment, giving the company a sizable addressable market. But Stretch doesn’t have a price-tag yet, and it could be that for businesses with low margins, a robot isn’t worth the hassle no matter how mobile it is.

Boston Dynamics has been showing interest in the logistics space since 2019 when it purchased Kinema Systems, a company that makes machine vision software for robots in warehouses. It then designed a wheeled robot called Handlethat could move boxes using a robotic arm, balancing itself with a huge swinging counterweight like a tail.

Perry says Handle had “the right footprint and right reach” for warehouses, but couldn’t work fast enough. The robot’s arm is directly attached to its main body, meaning the whole machine had to move with each load. Stretch’s arm, by comparison, swivels freely thanks to some clever (and patent-pending) counterweights hidden inside its square base.

“That’s really the secret sauce,” says Perry. “That base is able to handle the inertial force of the arm plus the box swinging at a fast weight, without having to rely on a several-thousand kilo steel plate bolted to the floor.”

Stretch’s lineage can be traced back to Boston Dynamics’ two-legged Atlas robot, which is able to balance its weight so smoothly it can run, jump, backflip, and more. “Atlas picking up a box isn’t just about extending the arms and moving them, it’s about coordinating the hips, legs, and torso,” says Perry. “A lot of that same design thinking has gone into Stretch.”

As a result, Boston Dynamics claims Stretch can move up to 800 cases an hour, a through-put rate that’s comparable to that of a human employee. High-capacity batteries mean Stretch can operate for eight hours at a time before it needs recharging.

That throughput rate, though, should be treated with skepticism. Putting robots to work in warehouses is incredibly difficult because of the sheer variation in these spaces. Workflows can change on a daily basis as different goods come and go, and what’s often valued is flexibility. The inability of machines to handle these challenges so far is what’s led to an all-or-nothing dynamic in automation. You either remake the entire warehouse so it’s regular enough for machines to understand, or you stick with humans, masters of the unknown.

Boston Dynamics’ big claim is that Stretch will be able to bridge this divide. The company says the robot can be operated by anyone with just a few hours of training, and that its mobile base means it can slot into spaces designed for humans. Will it work? We’ll only find out once Stretch gets to grips with the job. Boston Dynamics says it’s currently looking for customers to pilot test Stretch, and is aiming for commercial deployment in 2022.