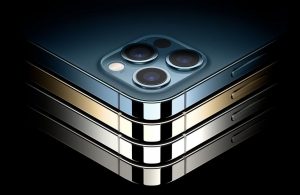 The “iPhone 13” could have an always-on display, a rumor claims, one that could potentially light up portions for a brief period to show notifications to the user, without illuminating the entire screen.

The 2021 iPhone refresh is already rumored to include a few big changes in its display technology. However, one of the features could be the always-on function that was introduced in the Apple Watch Series 6.

According to Max Weinbach viaEverythingApplePro, the “iPhone 13” may use an always-on display. To users, this will mean that the lockscreen will still show some important elements, but won’t necessarily fully illuminate in the same way as current models do.

The clock and battery icons will apparently always be visible on the screen, even if the screen is locked, and will do so regardless of the illuminated state of the rest of the display.

Notifications are displayed on the lock screen “using a bar and icons,” with it popping up normally on the display, though not all of the screen will light up. “Instead, it will display it just like you’re used to right now, except dimmed down and only temporarily,” said Weinbach.

Weinbach has a decent track record when it comes to leaks, along with EverythingApplePro’s reporting. The pair were a main proponent of ProMotion rumors for the iPhone 12 in 2020, though that feature did not make it into production models.

Early rumors surrounding the “iPhone 13” have already revived the idea of a 120Hz iPhone display, using LTPO technology to handle the variable clock speed of ProMotion. It would also be feasible for the technology to provide an always-on function, as it does for the Apple Watch by minimizing the refresh rate to save power.

So far, there have only been rumors about the technology’s use in the “iPhone 13,” and with relatively few reports at that. As time nears for its launch, the specifications for the inbound generation may become clearer.

Other rumors include a four-camera array with LiDAR, a smaller or minimal notch at the front, a port-less design without Lightning, and the return of Touch ID.